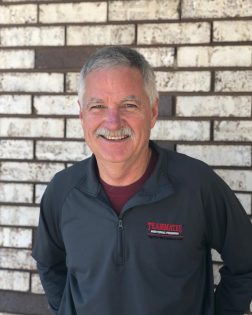 Dr. Kim Baxter from North Platte, Nebraska earned the title of “Mentor of the Month” for National Mentoring Month.

Here’s why his chapter coordinator believes he deserves this honor:

“Kim has been involved in TeamMates for over 20 years. He has served on the state and local board of TeamMates and has been a key part of the North Platte chapter and our successes. When I think of someone who emodies TeamMates and the core values of our program, I think of Kim Baxter. He unknowingly recruits mentors on a daily basis and works very hard to make sure our chapter is successful. He has had several mentees throughout the years, but the one match that sticks out in my mind is Aiden. Aiden attended the Catholic Schools in North Platte and graduated in the top of his class, eventually attending basic training. Prior to being matched with Aiden, Kim went through some pretty tough times. He lost his son and was not sure that he could mentor a youth again. I encouraged Kim to get back into mentoring, because I thought it was where he needed to be. I had watched Kim throughout the years mentor several young men and I knew that his heart was meant to make a difference. Kim will testify that through his relationship with Aiden, he found comfort and healing after the passing of his son. It was what Kim needed to push through such a traumatic event in his life. Looking back, I know that Aiden and Kim have built a friendship that will last a lifetime. Kim needed Aiden just as much as Aiden needed Kim. Just recently, Kim had another mentee reach out to him and asked him to be the best man in his wedding. When I think of someone who has impacted the world by inspiring youth to reach their full potential, I think of Kim Baxter. He has truly made a difference in so many ways and because of his dedication to TeamMates I believe he should be the NMM mentor of the month.”