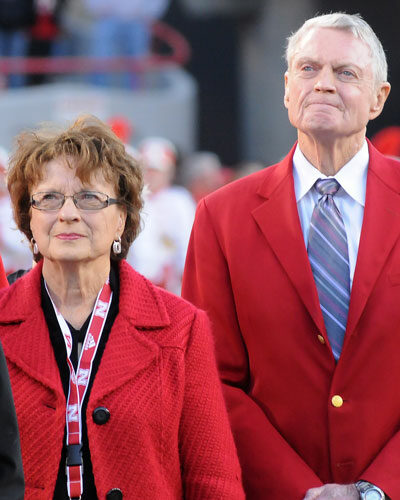 The TeamMates Mentoring program, founded by Tom and his wife, Nancy, started with 22 football players in 1991, provides support, encouragement to school-aged youth with the goal of seeing children graduate from high school and pursue a post-secondary education.

The playing field at Memorial Stadium is called Tom Osborne Field in honor of a man, who in 25 seasons as Nebraska head coach, built a total program based on more than winning.

Widely known for his leadership, integrity, honor and compassion, Osborne has poured time and effort into building a unique mentoring program within the state. The TeamMates Mentoring program, founded by Tom and his wife, Nancy, started with 22 football players in 1991, provides support,  encouragement to school-aged youth with the goal of seeing children graduate from high school and pursue a post-secondary education. TeamMates celebrated its 30th anniversary in 2022 and has expanded into more than 10,000 matches in a five-state region.

Osborne was named Nebraska’s head coach following the 1972 season and under his direction, the program achieved remarkable success, exceeding any in its rich history. Osborne’s 25-year coaching career came to a poetic end in the 1998 Orange Bowl. In his final game, the Huskers defeated No. 3 Tennessee, 42-17, giving Osborne a share of a third national title in four seasons. The victory left Osborne as the first coach in college football history to retire as a reigning national champion. He also left the sideline with the nation’s best active winning percentage (.836, 255-49-3), a mark that still ranks sixth all-time among Division I coaches.

Osborne-coached Nebraska teams captured 13 conference crowns, including six of his final seven seasons as head coach. All 25 of his Husker teams won at least nine games and played in a bowl, with 15 of his Husker teams winning 10 or more games. Osborne’s 255 career victories are the eighth-most all-time among major college football coaches.

In the classroom, Osborne’s teams were just as successful as they were on the field. Under Osborne’s guidance, the Husker football program totaled 65 CoSIDA Academic All-America awards in 25 years, averaging more than two selections per season.

Prior to becoming head coach, Osborne spent five seasons under Devaney, helping the Huskers win back-to-back national championships in 1970 and 1971. In 1973, Osborne succeeded Devaney, who also served as Nebraska’s Athletic Director from 1967 to 1993.

Devaney put Osborne in charge of the offense that won two national titles and allowed him to concentrate on three areas he thought were important – a strong academic program for student-athletes, a strength and conditioning program and a more formalized program to attract walk-on players.

Holder of master’s and doctorate degrees from the University of Nebraska in educational psychology, Osborne said he probably would not have considered coaching if he had not met Devaney, who convinced him to become a volunteer graduate assistant on his staff.

Osborne returned to his roots on Oct. 16, 2007, to become the 13th athletic director at the University of Nebraska. Two months later, on Dec. 20, 2007, Chancellor Harvey Perlman announced that the word “interim” had been removed from Osborne’s title.

Within months of his appointment, Osborne quietly re-established an athletic department mission based on five core values – integrity, trust, respect, teamwork and loyalty. Nebraska fans across the country and around the world expressed confidence in Osborne’s experience, his understanding of Nebraska and his desire to elevate the program back among the nation’s elite.

After retiring from football in 1997, Osborne found several ways to stay active in his home state. His most visible post-coaching foray came in the political arena, as he served three terms in the U.S. House of Representatives from Nebraska’s 3rd congressional district from 2000 to 2006. He also made a gubernatorial bid in 2006 before turning to academia.

A native of Hastings, Neb., Osborne served as a senior lecturer at Nebraska in the College of Business Administration, teaching leadership and business ethics, in the fall of 2007. He completed the fall semester while working in the athletic department. Osborne also worked as a consultant for local college athletic departments.

Osborne still actively provides leadership in the college football ranks. He served on the College Football Playoff Committee in 2014 and 2015 and had previously been a voter on the coaches poll for the Master Coaches Poll.

Osborne and his wife, Nancy, have three adult children, Mike, Ann and Suzanne and five grandchildren.